In a pioneering study of childhood in colonial Spanish America, Bianca Premo examines the lives of youths in the homes, schools, and institutions of the capital city of Lima, Peru. Situating these young lives within the framework of law and intellectual history from 1650 to 1820, Premo brings to light the colonial politics of childhood and challenges readers to view patriarchy as a system of power based on age, caste, and social class as much as gender.

Although Spanish laws endowed elite men with an authority over children that mirrored and reinforced the monarch's legitimacy as a colonial "Father King," Premo finds that, in practice, Lima's young often grew up in the care of adults--such as women and slaves--who were subject to the patriarchal authority of others. During the Bourbon Reforms, city inhabitants of all castes and classes began to practice a "new politics of the child," challenging men and masters by employing Enlightenment principles of childhood. Thus the social transformations and political dislocations of the late eighteenth century occurred not only in elite circles and royal palaces, Premo concludes, but also in the humble households of a colonial city. 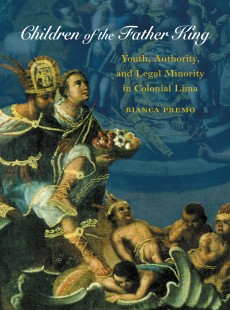 Children of the Father King