In this richly illustrated study, the first book-length exploration of illusionistic art in the early United States, Wendy Bellion investigates Americans' experiences with material forms of visual deception and argues that encounters with illusory art shaped their understanding of knowledge, representation, and subjectivity between 1790 and 1825. Focusing on the work of the well-known Peale family and their Philadelphia Museum, as well as other Philadelphians, Bellion explores the range of illusions encountered in public spaces, from trompe l'oeil paintings and drawings at art exhibitions to ephemeral displays of phantasmagoria, "Invisible Ladies," and other spectacles of deception.

Bellion reconstructs the elite and vernacular sites where such art and objects appeared and argues that early national exhibitions doubled as spaces of citizen formation. Within a post-Revolutionary culture troubled by the social and political consequences of deception, keen perception signified able citizenship. Setting illusions into dialogue with Enlightenment cultures of science, print, politics, and the senses, Citizen Spectator demonstrates that pictorial and optical illusions functioned to cultivate but also to confound discernment. Bellion reveals the equivocal nature of illusion during the early republic, mapping its changing forms and functions, and uncovers surprising links between early American art, culture, and citizenship. 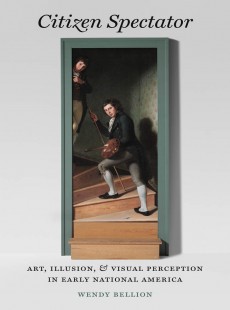