In this expansive history of South Carolina's commemoration of the Civil War era, Thomas J. Brown uses the lens of place to examine the ways that landmarks of Confederate memory have helped white southerners negotiate their shifting political, social, and economic positions. By looking at prominent sites such as Fort Sumter, Charleston's Magnolia Cemetery, and the South Carolina statehouse, Brown reveals a dynamic pattern of contestation and change. He highlights transformations of gender norms and establishes a fresh perspective on race in Civil War remembrance by emphasizing the fluidity of racial identity within the politics of white supremacy.

Despite the conservative ideology that connects these sites, Brown argues that the Confederate canon of memory has adapted to address varied challenges of modernity from the war's end to the present, when enthusiasts turn to fantasy to renew a faded myth while children of the civil rights era look for a usable Confederate past. In surveying a rich, controversial, and sometimes even comical cultural landscape, Brown illuminates the workings of collective memory sustained by engagement with the particularity of place. 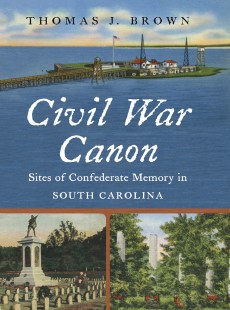