Published through the Recovering Languages and Literacies of the Americas initiative, supported by the Andrew W. Mellon FoundationVictoria Howard was born around 1865, a little more than ten years after the founding of the Confederated Tribes of Grand Ronde in western Oregon. Howard?s maternal grandmother, Wagayuhlen Quiaquaty, was a successful and valued Clackamas shaman at Grand Ronde, and her maternal grandfather, Quiaquaty, was an elite Molalla chief. In the summer of 1929 the linguist Melville Jacobs, student of Franz Boas, requested to record Clackamas Chinook oral traditions with Howard, which she enthusiastically agreed to do. The result is an intricate and lively corpus of linguistic and ethnographic material, as well as rich performances of Clackamas literary heritage, as dictated by Howard and meticulously transcribed by Jacobs in his field notebooks. Ethnographical descriptions attest to the traditional lifestyle and environment in which Howard grew up, while fine details of cultural and historical events reveal the great consideration and devotion with which she recalled her past and that of her people.Catharine Mason has edited twenty-five of Howard's spoken-word performances into verse form entextualizations, along with the annotations provided by Jacobs in his publications of Howard's corpus in the late 1950s. Mason pairs performances with biographical, family, and historical content that reflects Howard?s ancestry, personal and social life, education, and worldview. Mason's study reveals strong evidence of how the artist contemplated and internalized the complex meanings and everyday lessons of her literary heritage. 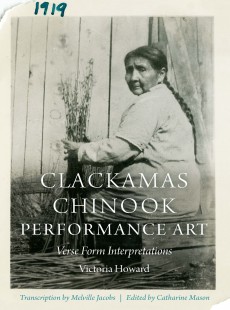