Donald Trump's presidency was marked by angry attacks on journalists, an extraordinary ability to capture the media spotlight, a flood of disinformation from the White House, and bitter partisanship reflected in the media. Trump's dysfunctional relationship with the press affected how the United States dealt with the crises of COVID-19, climate change, social unrest due to systemic racism, and efforts to overturn the 2020 election. But Trump's troubled relationship with the press didn't happen by chance.Clash explores the political, economic, social, and technological forces that have shaped the relationship between U.S. presidents and the press during times of crisis. In addition to Trump's presidency, Clash examines those of John Adams, Abraham Lincoln, Woodrow Wilson, Franklin Roosevelt, Richard Nixon, Ronald Reagan, Bill Clinton, George W. Bush, and Barack Obama. Some of these presidents faced military or international crises. Others were challenged by economic downturns or political scandals. And sometimes the survival of America's system of government was at stake. By examining what happened between presidents and the press during these pivotal times, Clash helps us understand how we arrived at our current troubled state of affairs. It concludes with recommendations for strengthening the role the press plays in keeping presidents accountable. 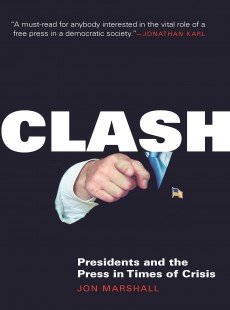 Presidents and the Press in Times of Crisis