From 2004 to 2006 the Osage Nation conducted a contentious governmental reform process in which sharply differing visions arose over the new government's goals, the Nation's own history, and what it means to be Osage. The primary debates were focused on biology, culture, natural resources, and sovereignty. Osage anthropologist Jean Dennison documents the reform process in order to reveal the lasting effects of colonialism and to illuminate the possibilities for indigenous sovereignty. In doing so, she brings to light the many complexities of defining indigenous citizenship and governance in the twenty-first century.
By situating the 2004-6 Osage Nation reform process within its historical and current contexts, Dennison illustrates how the Osage have creatively responded to continuing assaults on their nationhood. A fascinating account of a nation in the midst of its own remaking, Colonial Entanglement presents a sharp analysis of how legacies of European invasion and settlement in North America continue to affect indigenous people's views of selfhood and nationhood. 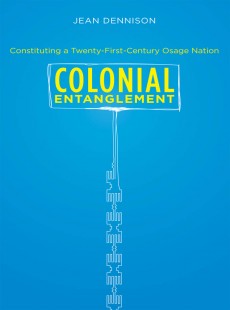