Come Now, Let Us Argue It Out provides a look into a community that challenges common narratives about what it means to be LGBTQ and Christian in the contemporary United States. Based on his participant-observation fieldwork with a faith-based organization called the Reformation Project, Jon Burrow-Branine provides an ethnography of how some LGBTQ and LGBTQ-supportive Christians negotiate identity and difference and work to create change in evangelicalism.Come Now, Let Us Argue It Out tells the story of how this activism can be understood as a community of counter-conduct. Drawing on a concept proposed by the philosopher and historian Michel Foucault, Burrow-Branine documents everyday moments of agency and resistance that have the potential to form new politics, ethics, and ways of being as individuals in this community navigate the exclusionary politics of mainstream evangelical institutions, culture, and theology. More broadly, Burrow-Branine considers the community's ongoing conversation about what it means to be LGBTQ and a Christian, grappling with the politics of inclusion and representation in LGBTQ evangelical activism itself. 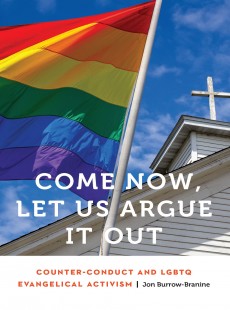 Come Now, Let Us Argue It Out