The conversion of African-born slaves and their descendants to Protestant Christianity marked one of the most important social and intellectual transformations in American history. Come Shouting to Zion is the first comprehensive exploration of the processes by which this remarkable transition occurred. Using an extraordinary array of archival sources, Sylvia Frey and Betty Wood chart the course of religious conversion from the transference of traditional African religions to the New World through the growth of Protestant Christianity in the American South and British Caribbean up to 1830.


Come Shouting to Zion depicts religious transformation as a complex reciprocal movement involving black and white Christians. It highlights the role of African American preachers in the conversion process and demonstrates the extent to which African American women were responsible for developing distinctive ritual patterns of worship and divergent moral values within the black spiritual community. Finally, the book sheds light on the ways in which, by serving as a channel for the assimilation of Western culture into the slave quarters, Protestant Christianity helped transform Africans into African Americans. 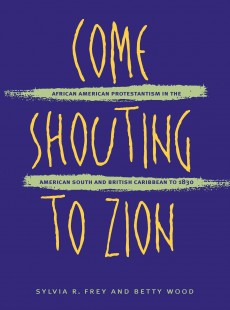