Between the Great War and Pearl Harbor, conservative labor leaders declared themselves America's "first line of defense" against Communism. In this surprising account, Jennifer Luff shows how the American Federation of Labor fanned popular anticommunism but defended Communists' civil liberties in the aftermath of the 1919 Red Scare. The AFL's "commonsense anticommunism," she argues, steered a middle course between the American Legion and the ACLU, helping to check campaigns for federal sedition laws. But in the 1930s, frustration with the New Deal
order led labor conservatives to redbait the Roosevelt administration and liberal unionists and abandon their reluctant civil libertarianism for red scare politics. That frustration contributed to the legal architecture of federal anticommunism that culminated with the McCarthyist fervor of the 1950s.
Relying on untapped archival sources, Luff reveals how labor conservatives and the emerging civil liberties movement debated the proper role of the state in policing radicals and grappled with the challenges to the existing political order posed by Communist organizers. Surprising conclusions about familiar figures, like J. Edgar Hoover, and unfamiliar episodes, like a German plot to disrupt American munitions manufacture, make Luff's story a fresh retelling of the interwar years. 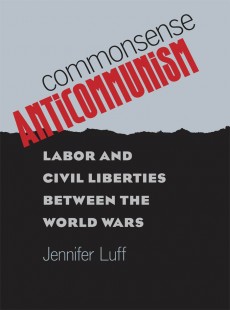 Labor and Civil Liberties between the World Wars