American democracy has fascinated generations of historians. They have probed its philosophical foundations and the structure of its institutions, but their studies reveal little about those who really wielded power in the formative years of the republic.

Employing a sophisticated research design, Whitman Ridgway examines the changing leadership patterns in four diverse communities in Maryland from 1790 to 1840. The results indicate clearly the need to study the American democratic process at the local level. Ridgway selected Baltimore City, Frederick, St. Marys, and Talbot counties -- representing the underlying economic and cultural diversity of one political culture, Maryland -- to evaluate who governed, how these patterns differed from one community to another, and how such patterns changed over time. The research design defines the scope of the study. Ridgway uses the decisional method of analysis, determining who actually made decisions, in order to identify the political leaders. His extensive research in manuscript and newspaper collections, tax and census data, and religious and geneological records gathered information on some 1,300 persons.

This study of community power illuminates facets of a democratic society which perplexed Alexis de Tocqueville over a century ago. Ridgway demonstrates that, despite the expansion of popular participation in political affairs, the influence of the wealthy continued to be significant. He shows also how leaders without benefit of wealth or social ties to the oligarchies were able to enter community decision making.

In a more modern context, this important book adds to the literature in several ways. Its greatest contribution is methological -- no longer can historians talk about power relationships without studying them directly. The work also compares two important periods, the first and second party eras, normally treated in isolation; and through this comparison it reveals much about democracy, egalitarianism, and power. 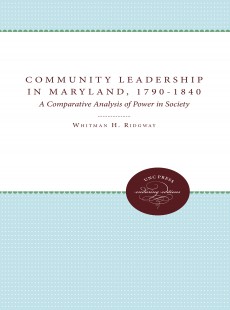 A Comparative Analysis of Power in Society