While Americans have been deeply absorbed with the topic of immigration for generations, emigration from the United States has been almost entirely ignored. Following the U.S. Civil War an estimated ten thousand Confederates left the U.S. South, most of them moving to Brazil, where they became known as "Confederados," Portuguese for "Confederates." These Southerners were the largest organized group of white Americans to ever voluntarily emigrate from the United States. In Confederate Exodus Alan P. Marcus examines the various factors that motivated this exodus, including the maneuvering of various political leaders, communities, and institutions as well as agro-economic and commercial opportunities in Brazil. Marcus considers Brazilian immigration policies, capitalism, the importance of trade and commerce, and race as salient dimensions. He also provides a new synthesis for interpreting the Confederado story and for understanding the impact of the various stakeholders who encouraged, aided, promoted, financed, and facilitated this broader emigration from the U.S. South. 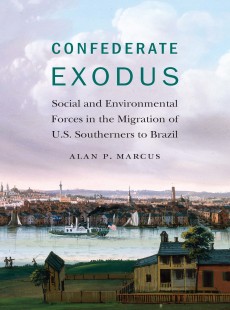 Social and Environmental Forces in the Migration of U.S. Southerners to Brazil