When Confederate men marched off to battle, southern women struggled with the new responsibilities of directing farms and plantations, providing for families, and supervising increasingly restive slaves. Drew Gilpin Faust offers a compelling picture of the more than half-million women who belonged to the slaveholding families of the Confederacy during this period of acute crisis, when every part of these women's lives became vexed and uncertain.

In this UNC Press Short, excerpted from Mother's of Invention: Women of the Slaveholding South in the American Civil War, Drew Gilpin Faust explores the legendary hostility of Confederate women toward Yankee soldiers. From daily acts of belligerence to murder and espionage, these women struggled not only with the Yankee enemy in their midst but with the genteel ideal of white womanhood that was at odds with their wartime acts of resistance.

UNC Press Civil War Shorts excerpt compelling, shorter narratives from selected best-selling books published by the University of North Carolina Press and present them as engaging, quick reads. Produced exclusively in ebook format, these shorts present essential concepts, defining moments, and concise introductions to topics. They are intended to stir the imagination and encourage further exploration of the original publications from which these works are drawn. 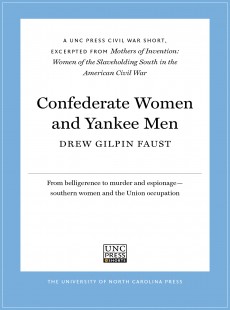 A UNC Press Civil War Short, Excerpted from Mothers of Invention: Women of the Slaveholding South in the American Civil War