Published through the Early American Places initiative, supported by the Andrew W. Mellon Foundation.Conquering Sickness presents a comprehensive analysis of race, health, and colonization in a specific cross-cultural contact zone in the Texas borderlands between 1780 and 1861. Throughout this eighty-year period, ordinary health concerns shaped cross-cultural interactions during Spanish, Mexican, and Anglo colonization. Historians have shown us that Spanish, Mexican, and Anglo American settlers in the contested borderlands read the environment to determine how to live healthy, productive lives. Colonizers similarly outlined a culture of healthy living by observing local Native and Mexican populations. For colonists, Texas residents' so-called immorality—evidenced by their "indolence," "uncleanliness," and "sexual impropriety"—made them unhealthy. In the Spanish and Anglo cases, the state made efforts to reform Indians into healthy subjects by confining them in missions or on reservations. Colonists' views of health were taken as proof of their own racial superiority, on the one hand, and of Native and Mexican inferiority, on the other, and justified the various waves of conquest. As in other colonial settings, however, the medical story of Texas colonization reveals colonial contradictions. Mark Allan Goldberg analyzes how colonizing powers evaluated, incorporated, and discussed local remedies. Conquering Sickness reveals how health concerns influenced cross-cultural relations, negotiations, and different forms of state formation. Focusing on Texas, Goldberg examines the racialist thinking of the region in order to understand evolving concepts of health, race, and place in the nineteenth century borderlands. 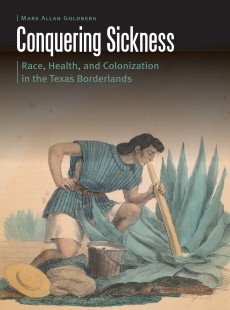 Race, Health, and Colonization in the Texas Borderlands