In histories of enslavement and in Black women's history, coercion looms large in any discussion of sex and sexuality. At a time when sexual violence against Black women was virtually unregulated—even normalized—a vast economy developed specifically to sell the sexual labor of Black women. In this vividly rendered book, Emily A. Owens wrestles with the question of why white men paid notoriously high prices to gain sexual access to the bodies of enslaved women to whom they already had legal and social access.

Owens centers the survival strategies and intellectual labor of Black women enslaved in New Orleans to unravel the culture of violence they endured, in which slaveholders obscured "the presence of force" with arrangements that included gifts and money. Owens's storytelling highlights that the classic formulation of rape law that requires "the presence of force" and "the absence of consent" to denote a crime was in fact a key legal fixture that packaged predation as pleasure and produced, rather than prevented, violence against Black women. Owens dramatically reorients our understanding of enslaved women's lives as well as of the nature of violence in the entire venture of racial slavery in the U.S. South. Unsettling the idea that consent is necessarily incompatible with structural and interpersonal violence, this history shows that when sex is understood as a transaction, women are imagined as responsible for their own violation. 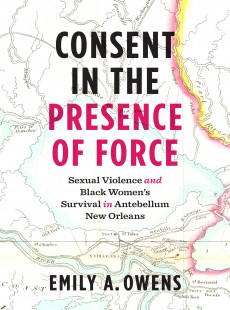 Consent in the Presence of Force