According to the traditional understanding of American constitutional law, the Revolution produced a new conception of the constitution as a set of restrictions on the power of the state rather than a mere description of governmental roles. Daniel J. Hulsebosch complicates this viewpoint by arguing that American ideas of constitutions were based on British ones and that, in New York, those ideas evolved over the long eighteenth century as New York moved from the periphery of the British Atlantic empire to the center of a new continental empire.

Hulsebosch explains how colonists and administrators reconfigured British legal sources to suit their needs in an expanding empire. In this story, familiar characters such as Alexander Hamilton and James Kent appear in a new light as among the nation's most important framers, and forgotten loyalists such as Superintendent of Indian Affairs Sir William Johnson and lawyer William Smith Jr. are rightly returned to places of prominence.

In his paradigm-shifting analysis, Hulsebosch captures the essential paradox at the heart of American constitutional history: the Revolution, which brought political independence and substituted the people for the British crown as the source of legitimate authority, also led to the establishment of a newly powerful constitution and a new postcolonial genre of constitutional law that would have been the envy of the British imperial agents who had struggled to govern the colonies before the Revolution. 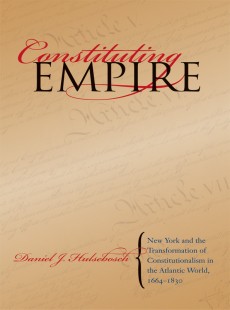 New York and the Transformation of Constitutionalism in the Atlantic World, 1664-1830