Making a vital contribution to our understanding of North American borderlands history through its examination of the northernmost stretches of the U.S.-Canada border, Andrea Geiger highlights the role that the North Pacific borderlands played in the construction of race and citizenship on both sides of the international border from 1867, when the United States acquired Russia's interests in Alaska, through the end of World War II. Imperial, national, provincial, territorial, reserve, and municipal borders worked together to create a dynamic legal landscape that both Indigenous and non-Indigenous people negotiated in myriad ways as they traversed these borderlands. Adventurers, prospectors, laborers, and settlers from Europe, Canada, the United States, Latin America, and Asia made and remade themselves as they crossed from one jurisdiction to another.

Within this broader framework, Geiger pays particular attention to the ways in which Japanese migrants and the Indigenous people who had made this borderlands region their home for millennia—Tlingit, Haida, and Tsimshian among others—negotiated the web of intersecting boundaries that emerged over time, charting the ways in which they infused these reconfigured national, provincial, and territorial spaces with new meanings. 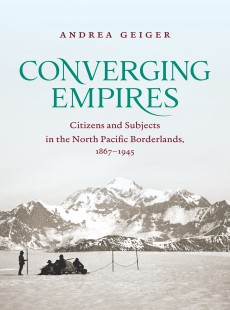 Citizens and Subjects in the North Pacific Borderlands, 1867–1945