James Fenimore Cooper's Leather-Stocking tales, published between 1823 and 1841, are generally regarded as America's first major works of fiction. Here, Geoffrey Rans provides not simply a new reading of the five novels that comprise the series but also a new way of reading them.

Rans analyzes each of the five novels (The Pioneers, The Last of the Mohicans, The Prairie, The Pathfinder, and The Deerslayer) in the order in which they were originally composed, an achronological sequence in terms of the stories they tell. As events in early written novels interact with those in later ones, the reader is compelled to construct political meanings different from Cooper's ideological preferences. This approach effectively precludes reading these works as Natty Bumppo's life story, or as an aspect of Cooper's. Rans presents the series as a text that faithfully reproduces the conflicts Cooper faced, both at the time when he wrote the novels and in the history that the novels contemplate.

Cooper emerges as a composer of richly problematical texts for which no aesthetic resolution is possible and in which every idealization, political or poetic, is relentlessly subjected to the gaze of historical reality. The tension between potential and practice, which is apparent in the final two volumes of the tales, is present, Rans contends, from the inception of the series. Because the problems of racism and greed that Cooper addresses remained as unresolved for us as for him, Rans concludes that this reading of the Leather-Stocking tales reinforces both Cooper's central canonical position and his value as an articulator of political conflict. 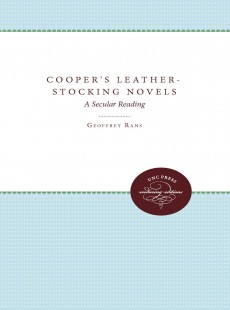