Using the Tennessee antievolution 'Monkey Law,' authored by a local legislator, as a measure of how conservatives successfully resisted, co-opted, or ignored reform efforts, Jeanette Keith explores conflicts over the meaning and cost of progress in Tennessee's hill country from 1890 to 1925.

Until the 1890s, the Upper Cumberland was dominated by small farmers who favored limited government and firm local control of churches and schools. Farm men controlled their families' labor and opposed economic risk taking; farm women married young, had large families, and produced much of the family's sustenance. But the arrival of the railroad in 1890 transformed the local economy. Farmers battled town dwellers for control of community institutions, while Progressives called for cultural, political, and economic modernization. Keith demonstrates how these conflicts affected the region's mobilization for World War I, and she argues that by the 1920s shifting gender roles and employment patterns threatened traditionalists' cultural hegemony. According to Keith, religion played a major role in the adjustment to modernity, and local people united to support the 'Monkey Law' as a way of confirming their traditional religious values. 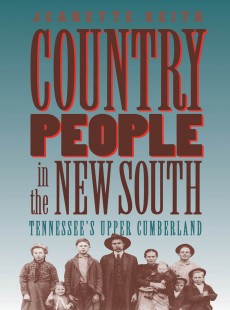 Country People in the New South