“We traveled this forenoon over the roughest and most desolate piece of ground that was ever made,” wrote Amelia Knight during her 1853 wagon train journey to Oregon. Some of the parties who traveled with Knight were propelled by religious motives. Hannah King, an Englishwoman and Mormon convert, was headed for Salt Lake City. Her cultured, introspective diary touches on the feelings of sensitive people bound together in a stressful undertaking. Celinda Hines and Rachel Taylor were Methodists seeking their new Canaan in Oregon. Also Oregon-bound in 1853 were Sarah (Sally) Perkins, whose minimalist record cuts deep, and Eliza Butler Ground and Margaret Butler Smith, sisters who wrote revealing letters after arriving. Going to California in 1854 were Elizabeth Myrick, who wrote a no-nonsense diary, and the teenage Mary Burrell, whose wit and exuberance prevail. 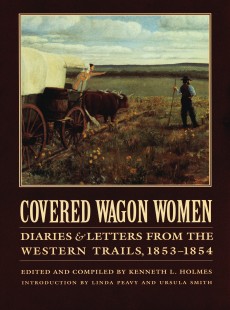