Some of the women traveling west in the late 1850s were strong advocates of equal rights for their sex. On the trail, Julia Archibald Holmes and Hannah Keziah Clapp sensibly wore the "freedom costume" called bloomers. In 1858 Holmes joined the Pikes Peak gold rush and was the first woman of record to climb the famous mountain. Educator Hannah Clapp traveled to California with a revolver by her side, speaking her mind in a letter included in this volume, which is also enriched by the trail diaries of seven other women. Among them were Sarah Sutton, who died in 1854, just before reaching Oregon's Willamette Valley; Sarah Maria Mousley, a Mormon woman traveling to Utah in 1857; and Martha Missouri Moore, who drove thousands of sheep from Missouri to California with her husband in 1860. 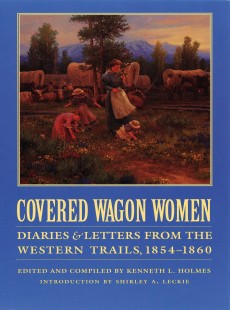