Although suburb-building created major environmental problems, Christopher Sellers demonstrates that the environmental movement originated within suburbs--not just in response to unchecked urban sprawl. Drawn to the countryside as early as the late nineteenth century, new suburbanites turned to taming the wildness of their surroundings. They cultivated a fondness for the natural world around them, and in the decades that followed, they became sensitized to potential threats. Sellers shows how the philosophy, science, and emotions that catalyzed the environmental movement sprang directly from suburbanites' lives and their ideas about nature, as well as the unique ecology of the neighborhoods in which they dwelt.

Sellers focuses on the spreading edges of New York and Los Angeles over the middle of the twentieth century to create an intimate portrait of what it was like to live amid suburban nature. As suburbanites learned about their land, became aware of pollution, and saw the forests shrinking around them, the vulnerability of both their bodies and their homes became apparent. Worries crossed lines of class and race and necessitated new ways of thinking and acting, Sellers argues, concluding that suburb-dwellers, through the knowledge and politics they forged, deserve much of the credit for inventing modern environmentalism. 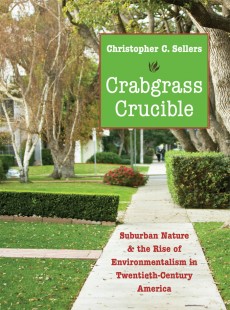 Suburban Nature and the Rise of Environmentalism in Twentieth-Century America