The crack of the bat on the radio is ingrained in the American mind as baseball takes center stage each summer. Radio has brought the sounds of baseball into homes for almost one hundred years, helping baseball emerge from the 1919 Black Sox scandal into the glorious World Series of the 1920s. The medium gave fans around the country aural access to the first All-Star Game, Lou Gehrig's farewell speech, and Bobby Thomson's "Shot Heard 'Round the World." Red Barber, Vin Scully, Harry Caray, Ernie Harwell, Bob Uecker, and dozens of other beloved announcers helped cement the love affair between radio and the national pastime. Crack of the Bat takes readers from the 1920s to the present, examining the role of baseball in the development of the radio industry and the complex coevolution of their relationship. James R. Walker provides a balanced, nuanced, and carefully documented look at radio and baseball over the past century, focusing on the interaction between team owners, local and national media, and government and business interests, with extensive coverage of the television and Internet ages, when baseball on the radio had to make critical adjustments to stay viable. Despite cable television's ubiquity, live video streaming, and social media, radio remains an important medium through which fans engage with their teams. The evolving relationship between baseball and radio intersects with topics as varied as the twenty-year battle among owners to control radio, the development of sports as a valuable media product, and the impact of competing technologies on the broadcast medium. Amid these changes, the familiar sounds of the ball hitting the glove and the satisfying crack of the bat stay the same.Purchase the audio edition. 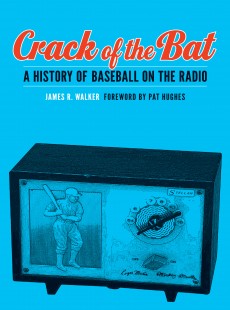 Crack of the Bat

A History of Baseball on the Radio