This analytical study examines in comprehensive detail the making of the American military and political commitment to Taiwan during the first half of the 1950s. Starting with President Truman's declaration in January 1950 that the United States would not militarily assist Taiwan's Nationalist Chinese government, Robert Accinelli shows why Washington subsequently reversed this position and ultimately chose to embrace Taiwan as a highly valued ally. Accinelli analyzes this critical reversal within the context of shifting international circumstances and domestic developments such as McCarthyism and the Truman-MacArthur controversy. In addition to describing the growth of a close but uneasy relationship between the United States and the Nationalist regime, he focuses on the importance of the Taiwan issue in America's relations with the People's Republic of China and Great Britain. He concludes his study with an analysis of the 1954-55 confrontation between the United States and China over Quemoy and Matsu and other Nationalist-held offshore islands. According to Accinelli, neither the Korean War nor the Indochina War divided the United States and China more fundamentally during this period than did the issue of U.S.-Taiwanese relations. 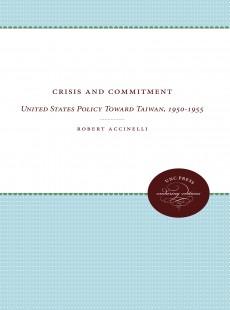