David Ruggles (1810-1849) was one of the most heroic--and has been one of the most often overlooked--figures of the early abolitionist movement in America. Graham Russell Gao Hodges provides the first biography of this African American activist, writer, publisher, and hydrotherapist who secured liberty for more than six hundred former bond people, the most famous of whom was Frederick Douglass. A forceful, courageous voice for black freedom, Ruggles mentored Douglass, Sojourner Truth, and William Cooper Nell in the skills of antislavery activism. As a founder of the New York Committee of Vigilance, he advocated a "practical abolitionism" that included civil disobedience and self-defense in order to preserve the rights of self-emancipated enslaved people and to protect free blacks from kidnappers who would sell them into slavery in the South.

Hodges's narrative places Ruggles in the fractious politics and society of New York, where he moved among the highest ranks of state leaders and spoke up for common black New Yorkers. His work on the Committee of Vigilance inspired many upstate New York and New England whites, who allied with him to form a network that became the Underground Railroad.

Hodges's portrait of David Ruggles establishes the abolitionist as an essential link between disparate groups--male and female, black and white, clerical and secular, elite and rank-and-file--recasting the history of antebellum abolitionism as a more integrated and cohesive movement than is often portrayed. 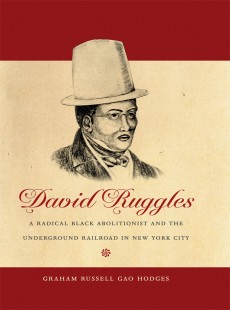