In the 1930s and 1940s, a loose alliance of blacks and whites, individuals and organizations, came together to offer a radical alternative to southern conservative politics. In Days of Hope, Patricia Sullivan traces the rise and fall of this movement. Using oral interviews with participants in this movement as well as documentary sources, she demonstrates that the New Deal era inspired a coalition of liberals, black activists, labor organizers, and Communist Party workers who sought to secure the New Deal's social and economic reforms by broadening the base of political participation in the South. From its origins in a nationwide campaign to abolish the poll tax, the initiative to expand democracy in the South developed into a regional drive to register voters and elect liberals to Congress. The NAACP, the CIO Political Action Committee, and the Southern Conference for Human Welfare coordinated this effort, which combined local activism with national strategic planning. Although it dramatically increased black voter registration and led to some electoral successes, the movement ultimately faltered, according to Sullivan, because the anti-Communist fervor of the Cold War and a militant backlash from segregationists fractured the coalition and marginalized southern radicals. Nevertheless, the story of this campaign invites a fuller consideration of the possibilities and constraints that have shaped the struggle for racial democracy in America since the 1930s. 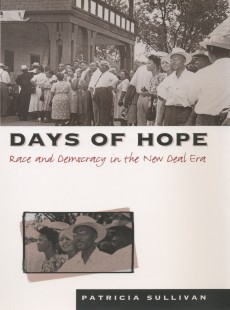 Race and Democracy in the New Deal Era