Late nineteenth-century Mexico was a country rife with health problems. In 1876, one out of every nineteen people died prematurely in Mexico City, a staggeringly high rate when compared to other major Western world capitals at the time, which saw more modest premature death rates of one out of fifty-two (London), one out of forty-four (Paris), and one out of thirty-five (Madrid). It is not an exaggeration to maintain that each day dozens of bodies could be found scattered throughout the streets of Mexico City, making the capital city one of the most unsanitary places in the Western Hemisphere. In light of such startling scenes, in Death Is All around Us Jonathan M. Weber examines how Mexican state officials, including President Porfirio Díaz, tried to resolve the public health dilemmas facing the city. By reducing the high mortality rate, state officials believed that Mexico City would be seen as a more modern and viable capital in North America. To this end the government used new forms of technology and scientific knowledge to deal with the thousands of unidentified and unburied corpses found in hospital morgues and cemeteries and on the streets. Tackling the central question of how the government used the latest technological and scientific advancements to persuade citizens and foreigners alike that the capital city—and thus Mexico as a whole—was capable of resolving the hygienic issues plaguing the city, Weber explores how the state's attempts to exert control over procedures of death and burial became a powerful weapon for controlling the behavior of its citizens. 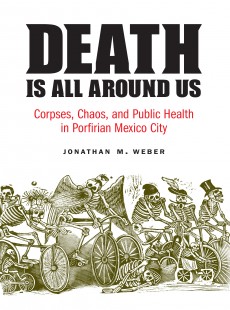 Death Is All around Us