Something is rotten in the U.S. Senate, and the disease has been spreading for some time. But Ben Nelson, former U.S. senator from Nebraska, is not going to let the institution destroy itself without a fight. Death of the Senate is a clear-eyed look inside the Senate chamber and a brutally honest account of the current political reality. In his two terms as a Democratic senator from the red state of Nebraska, Nelson positioned himself as a moderate broker between his more liberal and conservative colleagues and became a frontline player in the most consequential fights of the Bush and Obama years. His trusted centrist position gave him a unique perch from which to participate in some of the last great rounds of bipartisan cooperation, such as the "Gang of 14" that considered nominees for the federal bench and passed over a young lawyer named Brett Kavanaugh for being too partisan. Nelson learned early on that the key to any negotiation at any level is genuine trust. With humor, insight, and firsthand details, Nelson makes the case that the "heart of the deal" is critical and describes how he focused on this during his time in the Senate. As seen through the eyes of a centrist senator from the Great Plains, Nelson shows how and why the spirit of bipartisanship declined and offers solutions that can restore the Senate to one of the world's most important legislative bodies. 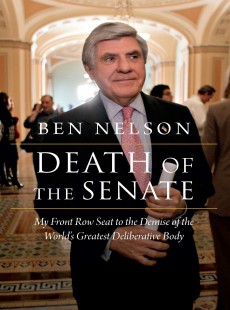 Death of the Senate