After the Supreme Court ruled school segregation unconstitutional in 1954, southern white backlash seemed to explode overnight. Journalists profiled the rise of a segregationist movement committed to preserving the "southern way of life" through a campaign of massive resistance. In Defending White Democracy, Jason Morgan Ward reconsiders the origins of this white resistance, arguing that southern conservatives began mobilizing against civil rights some years earlier, in the era before World War II, when the New Deal politics of the mid-1930s threatened the monopoly on power that whites held in the South.

As Ward shows, years before "segregationist" became a badge of honor for civil rights opponents, many white southerners resisted racial change at every turn--launching a preemptive campaign aimed at preserving a social order that they saw as under siege. By the time of the Brown decision, segregationists had amassed an arsenal of tested tactics and arguments to deploy against the civil rights movement in the coming battles. Connecting the racial controversies of the New Deal era to the more familiar confrontations of the 1950s and 1960s, Ward uncovers a parallel history of segregationist opposition that mirrors the new focus on the long civil rights movement and raises troubling questions about the enduring influence of segregation's defenders. 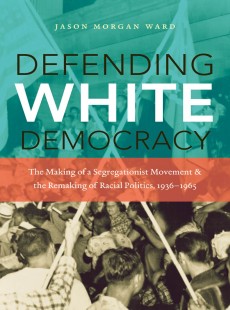 The Making of a Segregationist Movement and the Remaking of Racial Politics, 1936-1965