During the Great Depression, the American South was not merely "the nation's number one economic problem," as President Franklin Roosevelt declared. It was also a battlefield on which forces for and against social change were starting to form. For a white southern liberal like Jonathan Daniels, editor of the Raleigh News and Observer, it was a fascinating moment to explore. Attuned to culture as well as politics, Daniels knew the true South lay somewhere between Erskine Caldwell's Tobacco Road and Margaret Mitchell's Gone with the Wind. On May 5, 1937, he set out to find it, driving thousands of miles in his trusty Plymouth and ultimately interviewing even Mitchell herself.

In Discovering the South historian Jennifer Ritterhouse pieces together Daniels's unpublished notes from his tour along with his published writings and a wealth of archival evidence to put this one man's journey through a South in transition into a larger context. Daniels's well chosen itinerary brought him face to face with the full range of political and cultural possibilities in the South of the 1930s, from New Deal liberalism and social planning in the Tennessee Valley Authority, to Communist agitation in the Scottsboro case, to planters' and industrialists' reactionary worldview and repressive violence. The result is a lively narrative of black and white southerners fighting for and against democratic social change at the start of the nation's long civil rights era.

For more information on this book, see www.discoveringthesouth.org. 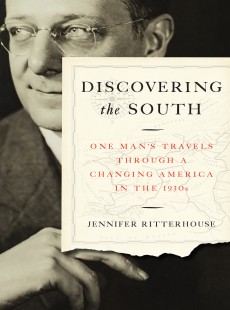 One Man's Travels through a Changing America in the 1930s