In this carefully crafted work, Jeffrey Young illuminates southern slaveholders' strange and tragic path toward a defiantly sectional mentality. Drawing on a wealth of archival evidence and integrating political, religious, economic, and literary sources, he chronicles the growth of a slaveowning culture that cast the southern planter in the role of benevolent Christian steward--even as slaveholders were brutally exploiting their slaves for maximum fiscal gain.

Domesticating Slavery offers a surprising answer to the long-standing question about slaveholders' relationship with the proliferating capitalistic markets of early-nineteenth-century America. Whereas previous scholars have depicted southern planters either as efficient businessmen who embraced market economics or as paternalists whose ideals placed them at odds with the industrializing capitalist society in the North, Young instead demonstrates how capitalism and paternalism acted together in unexpected ways to shape slaveholders' identity as a ruling elite. Beginning with slaveowners' responses to British imperialism in the colonial period and ending with the sectional crises of the 1830s, he traces the rise of a self-consciously southern master class in the Deep South and the attendant growth of political tensions that would eventually shatter the union. 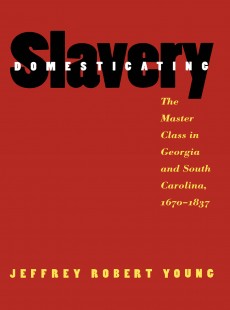