Major General Don Carlos Buell stood among the senior Northern commanders early in the Civil War, led the Army of the Ohio in the critical Kentucky theater in 1861-62, and helped shape the direction of the conflict during its first years. Only a handful of Northern generals loomed as large on the military landscape during this period, and Buell is the only one of them who has not been the subject of a full-scale biography.

A conservative Democrat, Buell viewed the Civil War as a contest to restore the antebellum Union rather than a struggle to bring significant social change to the slaveholding South. Stephen Engle explores the effects that this attitude--one shared by a number of other Union officers early in the war--had on the Northern high command and on political-military relations. In addition, he examines the ramifications within the Army of the Ohio of Buell's proslavery leanings.

A personally brave, intelligent, and talented officer, Buell nonetheless failed as a theater and army commander, and in late 1862 he was removed from command. But as Engle notes, Buell's attitude and campaigns provided the Union with a valuable lesson: that the Confederacy would not yield to halfhearted campaigns with limited goals. 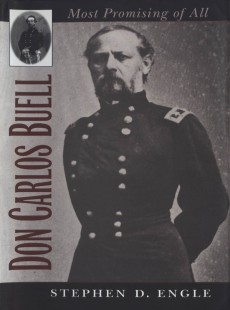 Most Promising of All