The practice of plural marriage, commonly known as polygamy, stirred intense controversy in postbellum America until 1890, when the Church of Jesus Christ of Latter-day Saints first officially abolished the practice. Elder Northfield’s Home, published by A. Jennie Bartlett in 1882, is both a staunchly antipolygamy novel and a call for the sentimental repatriation of polygamy’s victims. Her book traces the fate of a virtuous and educated English immigrant woman, Marion Wescott, who marries a Mormon elder, Henry Northfield. Shocked when her husband violates his promise not to take a second wife, Marion attempts to flee during the night, toddler son in her arms and pulling her worldly possessions in his toy wagon. She returns to her husband, however, and the balance of the novel traces the effects of polygamy on Marion, Henry, and their children; their eventual rejection of plural marriage; and their return to a normal and healthy family structure.   Nicole Tonkovich’s critical introduction includes both historical contextualization and comments on selected primary documents, providing a broader look at the general public’s reception of the practice of polygamy in the nineteenth century. 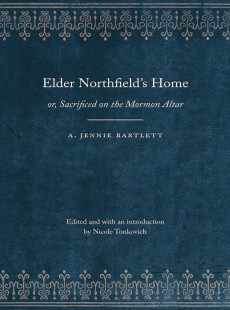 or, Sacrificed on the Mormon Altar