Most studies of emancipation's consequences have focused on the South. Moving the discussion to the North, Leslie Schwalm enriches our understanding of the national impact of the transition from slavery to freedom. Emancipation's Diaspora follows the lives and experiences of thousands of men and women who liberated themselves from slavery, made their way to overwhelmingly white communities in Iowa, Minnesota, and Wisconsin, and worked to live in dignity as free women and men and as citizens.

Schwalm explores the hotly contested politics of black enfranchisement as well as collisions over segregation, civil rights, and the more informal politics of race--including how slavery and emancipation would be remembered and commemorated. She examines how gender shaped the politics of race, and how gender relations were contested and negotiated within the black community. Based on extensive archival research, Emancipation's Diaspora shows how in churches and schools, in voting booths and Masonic temples, in bustling cities and rural crossroads, black and white Midwesterners--women and men--shaped the local and national consequences of emancipation. 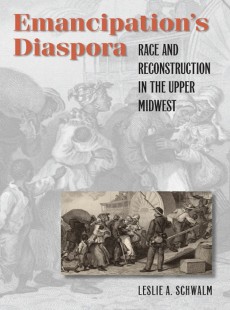 Race and Reconstruction in the Upper Midwest