As the culture of commercial capitalism came to dominate nineteenth-century New England, it changed people's ideas about how the world functioned, the nature of their work, their relationships to one another, and even the way they conceived of themselves as separate individuals. Drawing on the work of the last twenty years in New England social history, Mary Cayton argues that Ralph Waldo Emerson's work and career, when seen in the context of the momentous changes in the culture and economics of the region, reveal many of the tensions and contradictions inherent in the new capitalist social order. In exploring the genesis of liberal humanism as a calling in the United States, this case study implicitly poses questions about its assumptions, its aspirations, and its failings.

Cayton traces the ways in which the social circumstances of Emerson's Boston gave rise to his philosophy of natural organicism, his search for an appropriate definition of the intellectual's role within society, and his exhortations to individuals to distrust the norms and practices of the mass culture that was emerging. She addresses the historical context of Emerson's emergence as a writer and orator and undertakes to describe the Federalism and Unitarianism in which Emerson grew up, explaining why he eventually rejected them in favor of romantic transcendentalism.

Cayton demonstrates how Emerson's thought was affected by the social pressures and ideological constructs that launched the new cultural discourse of individualism. A work of intellectual history and American studies, this book explores through Emerson's example the ways in which intellectuals both make their cultures and are made by them. 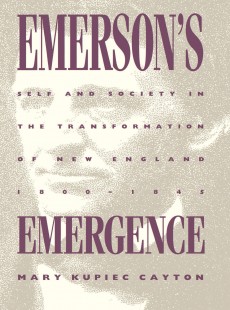 Self and Society in the Transformation of New England, 1800-1845