When the Empire of Japan defeated the Chinese Qing Dynasty in 1895 and won its first colony, Taiwan, it worked to establish it as a model colony. The Japanese brought Taiwan not only education and economic reform but also a new pastime made popular in Japan by American influence: baseball. But unlike in many other models, the introduction of baseball to Taiwan didn't lead to imperial indoctrination or nationalist resistance. Taiwan instead stands as a fascinating counterexample to an otherwise seemingly established norm in the cultural politics of modern imperialism. Taiwan's baseball culture evolved as a cultural hybrid between American, Japanese, and later Chinese influences. In Empire of Infields John J. Harney traces the evolution and identity of Taiwanese baseball, focusing on three teams: the Nenggao team of 1924–25, the Kanō team of 1931, and the Hongye schoolboy team of 1968. Baseball developed as an aspect of Japanese cultural practices that survived the end of Japanese rule at the end of World War II and was a central element of Japanese influence in the formation of popular culture across East Asia. The Republic of China (which reclaimed Taiwan in 1945) only embraced baseball in 1968 as an expression of a distinct Chinese nationalism and as a vehicle for political narratives.Empire of Infields explores not only the development of Taiwanese baseball but also the influence of baseball on Taiwan's cultural identity in its colonial years and beyond as a clear departure from narratives of assimilation and resistance. 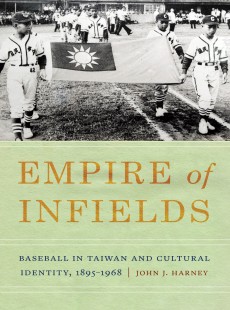