The transatlantic slave trade brought individuals from diverse African regions and cultures to a common destiny in the American South. In this comprehensive study, Michael Gomez establishes tangible links between the African American community and its African origins and traces the process by which African populations exchanged their distinct ethnic identities for one
defined primarily by the conception of race. He examines transformations in the politics, social structures, and religions of slave populations through 1830, by which time the contours of a new African American identity had begun to emerge.


After discussing specific ethnic groups in Africa, Gomez follows their movement to North America, where they tended to be amassed in recognizable concentrations within individual colonies (and, later, states). For this reason, he argues, it is possible to identify particular ethnic cultural influences and ensuing social formations that heretofore have been considered unrecoverable. Using sources pertaining to the African continent
as well as runaway slave advertisements, ex-slave narratives, and folklore, Gomez reveals concrete and specific links between particular African populations and their North American progeny, thereby shedding new light on subsequent African American social formation. 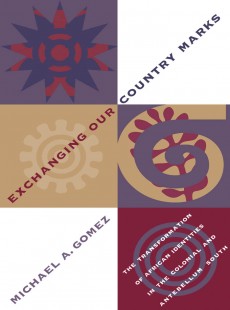 The Transformation of African Identities in the Colonial and Antebellum South