Eye on the World is the autobiography of diplomat Anthony C. E. Quainton, the story of a long and varied life lived in eleven countries on six continents. Rather than a formal history, this is Quainton's reflection on his interactions with the events of those times, beginning with George VI's historic visit to North America in 1939, through the years of the Cold War, the efforts to contain and then defeat the Soviet Union, and finally the two decades of uneasy peace that came after the fall of the Berlin Wall. To some of these events Quainton was merely a spectator. In other areas––India, Nicaragua, Kuwait, and Peru––he was actively involved either as a participant in the policy process in Washington or as the senior representative of the United States in those countries. Spanning his upbringing and education through two decades after his retirement, Quainton describes the expanding horizons of a middle-class boy from the northwest corner of North America as he encountered the complexity of the world in which he spent his professional life. Quainton served in seven different presidential appointments under presidents Gerald Ford, Jimmy Carter, Ronald Reagan, George H. W. Bush, and Bill Clinton. These included four ambassadorships in distinct parts of the world and three assistant secretary–level posts in Washington. This range of geographic and functional assignments was unique in his generation of Foreign Service officers. 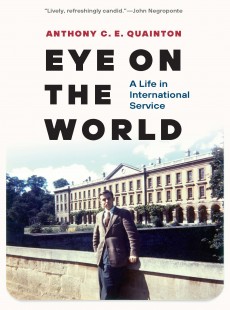 Eye on the World

A Life in International Service