In 1954 the U.S. Air Force launched an ambitious program known as WS-117L to develop the world's first reconnaissance satellite. The goal was to take photographic images from space and relay them back to Earth via radio. Because of technical issues and bureaucratic resistance, however, WS-117L was seriously behind schedule by the time Sputnik orbited Earth in 1957 and was eventually cancelled. The air force began concentrating instead on new programs that eventually launched the first successful U.S. spy satellites.Eyeing the Red Storm examines the birth of space-based reconnaissance not from the perspective of CORONA (the first photo reconnaissance satellite to fly) but rather from that of the WS-117L. Robert M. Dienesch's revised assessment places WS-117L within the larger context of Dwight D. Eisenhower's presidency, focusing on the dynamic between military and civilian leadership. Dienesch demonstrates how WS-117L promised Eisenhower not merely military intelligence but also the capacity to manage national security against the Soviet threat. As a fiscal conservative, Eisenhower believed a strong economy was the key to surviving the Cold War and saw satellite reconnaissance as a means to understand the Soviet military challenge more clearly and thus keep American defense spending under control.  Although WS-117L never flew, it provided the foundation for all subsequent satellites, breaking theoretical barriers and helping to overcome major technical hurdles, which ensured the success of America's first working reconnaissance satellites and their photographic missions during the Cold War.   Purchase the audio edition. 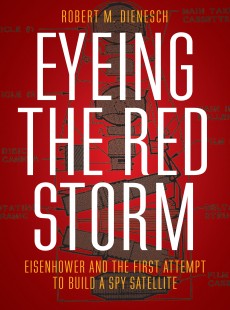 Eisenhower and the First Attempt to Build a Spy Satellite