The National Endowment for the Arts is often accused of embodying a liberal agenda within the American government. In Federalizing the Muse, Donna Binkiewicz assesses the leadership and goals of Presidents Kennedy through Carter, as well as Congress and the National Council on the Arts, drawing a picture of the major players who created national arts policy. Using presidential papers, NEA and National Archives materials, and numerous interviews with policy makers, Binkiewicz refutes persisting beliefs in arts funding as part of a liberal agenda by arguing that the NEA's origins in the Cold War era colored arts policy with a distinctly moderate undertone.

Binkiewicz's study of visual arts grants reveals that NEA officials promoted a modernist, abstract aesthetic specifically because they believed such a style would best showcase American achievement and freedom. This initially led them to neglect many contemporary art forms they feared could be perceived as politically problematic, such as pop, feminist, and ethnic arts. The agency was not able to balance its funding across a variety of art forms before facing serious budget cutbacks. Binkiewicz's analysis brings important historical perspective to the perennial debates about American art policy and sheds light on provocative political and cultural issues in postwar America. 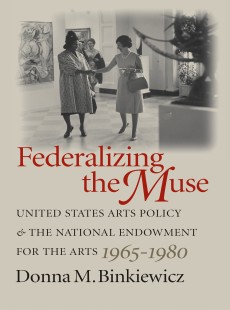 United States Arts Policy and the National Endowment for the Arts, 1965-1980