Rural women comprised the largest part of the adult population of Texas until 1940 and in the American South until 1960. On the cotton farms of Central Texas, women's labor was essential. In addition to working untold hours in the fields, women shouldered most family responsibilities: keeping house, sewing clothing, cultivating and cooking food, and bearing and raising children. But despite their contributions to the southern agricultural economy, rural women's stories have remained largely untold.
Using oral history interviews and written memoirs, Rebecca Sharpless weaves a moving account of women's lives on Texas cotton farms. She examines how women from varying ethnic backgrounds--German, Czech, African American, Mexican, and Anglo-American--coped with difficult circumstances. The food they cooked, the houses they kept, the ways in which they balanced field work with housework, all yield insights into the twentieth-century South. And though rural women's lives were filled with routines, many of which were undone almost as soon as they were done, each of their actions was laden with importance, says Sharpless, for the welfare of a woman's entire family depended heavily upon her efforts. 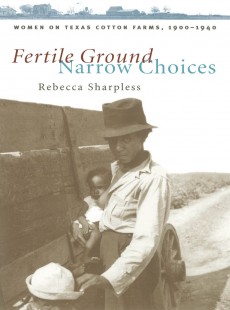