The Hatfield-McCoy feud, the entertaining subject of comic strips, popular songs, movies, and television, has long been a part of American folklore and legend. Ironically, the extraordinary endurance of the myth that has grown up around the Hatfields and McCoys has obscured the consideration of the feud as a serious historical event. In this study, Altina Waller tells the real story of the Hatfields and McCoys and the Tug Valley of West Virginia and Kentucky, placing the feud in the context of community and regional change in the era of industrialization.

Waller argues that the legendary feud was not an outgrowth of an inherently violent mountain culture but rather one manifestation of a contest for social and economic control between local people and outside industrial capitalists -- the Hatfields were defending community autonomy while the McCoys were allied with the forces of industrial capitalism. Profiling the colorful feudists "Devil Anse" Hatfield, "Old Ranel" McCoy, "Bad" Frank Phillips, and the ill-fated lovers Roseanna McCoy and Johnse Hatfield, Waller illustrates how Appalachians both shaped and responded to the new economic and social order. 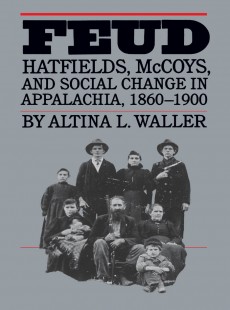