A moving narrative that offers a rare glimpse into the lives of African American men, women, and children on the cusp of freedom, First Fruits of Freedom chronicles one of the first collective migrations of blacks from the South to the North during and after the Civil War.

Janette Thomas Greenwood relates the history of a network forged between Worcester County, Massachusetts, and eastern North Carolina as a result of Worcester regiments taking control of northeastern North Carolina during the war. White soldiers from Worcester, a hotbed of abolitionism, protected refugee slaves, set up schools for them, and led them north at war's end. White patrons and a supportive black community helped many migrants fulfill their aspirations for complete emancipation and facilitated the arrival of additional family members and friends. Migrants established a small black community in Worcester with a distinctive southern flavor.

But even in the North, white sympathy did not continue after the Civil War. Despite their many efforts, black Worcesterites were generally disappointed in their hopes for full-fledged citizenship, reflecting the larger national trajectory of Reconstruction and its aftermath. 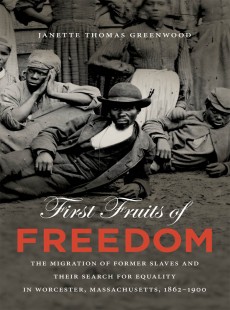 The Migration of Former Slaves and Their Search for Equality in Worcester, Massachusetts, 1862-1900