This book is the first major study of industrialists and social policy in Latin America. Barbara Weinstein examines the vast array of programs sponsored by a new generation of Brazilian industrialists who sought to impose on the nation their vision of a rational, hierarchical, and efficient society. She explores in detail two national agencies founded in the 1940s (SENAI and SESI) that placed vocational training and social welfare programs directly in the hands of industrialist associations. Assessing the industrialists' motives, Weinstein also discusses how both men and women in Brazil's working class received the agencies' activities. Inspired by the concepts of scientific management, rational organization, and applied psychology, Sao Paulo's industrialists initiated wide-ranging programs to raise the standard of living, increase productivity, and at the same time secure lasting social peace. According to Weinstein, workers initially embraced many of their efforts but were nonetheless suspicious of employers' motives and questioned their commitment to progressivism. By the 1950s, industrial leaders' notion of the working class as morally defective and their insistence on stemming civil unrest at all costs increasingly diverged from populist politics and led to the industrialists' active support of the 1964 military coup. 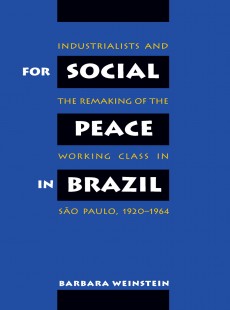 For Social Peace in Brazil

Industrialists and the Remaking of the Working Class in S