Examining the novels of Frank Norris, Theodore Dreiser, Jack London, and other writers, June Howard presents a study of American literary naturalism as a genre. Naturalism, she states, is a way of imagining the world and the relation of the self to the world, a way of making sense -- and making narrative -- out of the comforts and discomforts of its historical moment.

Howard believes that naturalism accomodates the sense of perilousness, uncertainty, and disorder that many Americans felt in the late nineteenth and early twentieth centuries. She argues for a redefinition of the form which allows it to be seen as an immanent ideology responding to a specific historical situation.

Working both from accepted definitions of naturalism and from close analysis of the literary texts themselves, Howard consructs a new description of the genre in terms of its thematic antinomies, patterns of characterization, and narrative strategies. She defines a range of historical and cultural reference for the ideas and images of American naturalism and suggests that the form has affinities with such contemporary ideologies as political progressivism and criminal anthropology. In the process, she demonstrates that genre criticism and historical analysis can be combined to create a powerful method for writing literary history.

Throughout Howard's study, the concept of genre is used not as a prescriptive straitjacket but as a category allowing the perception of significant similarities and differences among literary works and the coordination of textual analysis with the history of literary and social forces. For Howard, naturalism is a dynamic solution to the problem of generating narrative from the particular historical and cultural materials available to the authors. 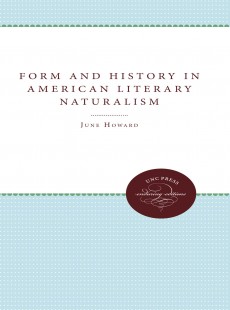