To many, asylums are a relic of a bygone era. State governments took steps between 1950 and 1990 to minimize the involuntary confinement of people in psychiatric hospitals, and many mental health facilities closed down. Yet, as Anne Parsons reveals, the asylum did not die during deinstitutionalization. Instead, it returned in the modern prison industrial complex as the government shifted to a more punitive, institutional approach to social deviance. Parsons shows how the lack of community-based services, a fear-based politics around mental illness, and the economics of institutions meant that closing mental hospitals fed a cycle of incarceration that became an epidemic.

This groundbreaking book recasts the political narrative of the late twentieth century, as Parsons charts how the politics of mass incarceration shaped the deinstitutionalization of psychiatric hospitals and mental health policy making. In doing so, she offers critical insight into how the prison took the place of the asylum in crucial ways, shaping the rise of the prison industrial complex. 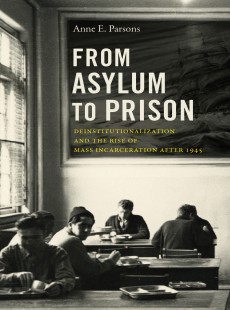 From Asylum to Prison

Deinstitutionalization and the Rise of Mass Incarceration after 1945