Today's domestic-advice writers--women such as Martha Stewart, Cheryl Mendelson, and B. Smith--are part of a long tradition, notes Sarah Leavitt. Their success rests on a legacy of literature that has focused on the home as an expression of ideals. Here, Leavitt crafts a fascinating genealogy of domestic advice, based on her readings of hundreds of manuals spanning 150 years of history.

Over the years, domestic advisors have educated women about everything from modernism and morality to sanitation and design. Their writings helped create the idealized vision of home held by so many Americans, Leavitt says. Investigating cultural themes in domestic advice written since the mid-nineteenth century, she demonstrates that these works, which found meaning in kitchen counters, parlor rugs, and bric-a-brac, have held the interest of readers despite vast changes in women's roles and opportunities.

Domestic-advice manuals have always been the stuff of fantasy, argues Leavitt, demonstrating cultural ideals rather than cultural realities. But these rich sources reveal how women understood the connection between their homes and the larger world. At its most fundamental level, the true domestic fantasy was that women held the power to reform their society through first reforming their homes. 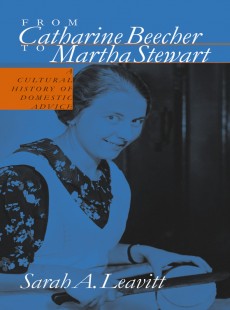 From Catharine Beecher to Martha Stewart

A Cultural History of Domestic Advice