During the late nineteenth and early twentieth centuries, more Americans belonged to fraternal societies than to any other kind of voluntary association, with the possible exception of churches. Despite the stereotypical image of the lodge as the exclusive domain of white men, fraternalism cut across race, class, and gender lines to include women, African Americans, and immigrants. Exploring the history and impact of fraternal societies in the United States, David Beito uncovers the vital importance they had in the social and fiscal lives of millions of American families.

Much more than a means of addressing deep-seated cultural, psychological, and gender needs, fraternal societies gave Americans a way to provide themselves with social-welfare services that would otherwise have been inaccessible, Beito argues. In addition to creating vast social and mutual aid networks among the poor and in the working class, they made affordable life and health insurance available to their members and established hospitals, orphanages, and homes for the elderly. Fraternal societies continued their commitment to mutual aid even into the early years of the Great Depression, Beito says, but changing cultural attitudes and the expanding welfare state eventually propelled their decline. 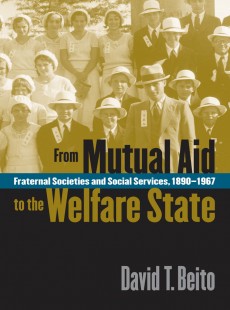 From Mutual Aid to the Welfare State