In the early years of the twentieth century, newcomer farmers and migrant Mexicans forged a new world in South Texas. In just a decade, this vast region, previously considered too isolated and desolate for large-scale agriculture, became one of the United States' most lucrative farming regions and one of its worst places to work. By encouraging mass migration from Mexico, paying low wages, selectively enforcing immigration restrictions, toppling older political arrangements, and periodically immobilizing the workforce, growers created a system of labor controls unique in its levels of exploitation.

Ethnic Mexican residents of South Texas fought back by organizing and by leaving, migrating to destinations around the United States where employers eagerly hired them--and continued to exploit them. In From South Texas to the Nation, John Weber reinterprets the United States' record on human and labor rights. This important book illuminates the way in which South Texas pioneered the low-wage, insecure, migration-dependent labor system on which so many industries continue to depend. 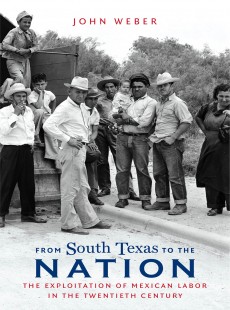 From South Texas to the Nation

The Exploitation of Mexican Labor in the Twentieth Century