Every Civil War veteran had a story to tell. But few stories top the one lived by Wright Stephen Batchelor. Like most North Carolina farmers, Batchelor eschewed slaveholding. He also opposed secession and war, yet he fought on both sides of the conflict. During his time in each uniform, Batchelor barely avoided death at the Battle of Gettysburg, was captured twice, and survived one of the war's most infamous prisoner-of-war camps. He escaped and, after walking hundreds of miles, rejoined his comrades at Petersburg, Virginia, just as the Union siege there began. Once the war ended, Batchelor returned on foot to his farm, where he took part in local politics, supported rights for freedmen, and was fatally involved in a bizarre hometown murder.

Michael K. Brantley's story of his great-great-grandfather's odyssey blends memory and Civil War history to look at how the complexities of loyalty and personal belief governed one man's actions—and still influence the ways Americans think about the conflict today. 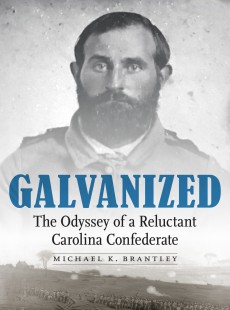 The Odyssey of a Reluctant Carolina Confederate