This classic work helps recover the central role of black women in the political history of the Jim Crow era. Glenda Elizabeth Gilmore explores the pivotal and interconnected roles played by gender and race in North Carolina politics from the period immediately preceding the disfranchisement of black men in 1900 to the time black and white women gained the vote in 1920. Gilmore argues that while the ideology of white supremacy reordered Jim Crow society, a generation of educated black women nevertheless crafted an enduring tradition of political activism. In effect, these women served as diplomats to the white community after the disfranchisement of their husbands, brothers, and fathers. Gilmore also reveals how black women's feminism created opportunities to forge political ties with white women, helping to create a foundation for the emergence of southern progressivism. In addition, Gender and Jim Crow illuminates the manipulation of concepts of gender by white supremacists and shows how this rhetoric changed once women, black and white, gained the vote. 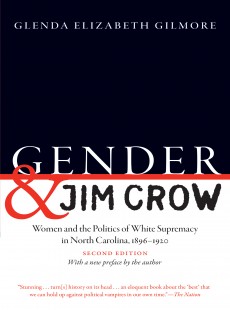 Women and the Politics of White Supremacy in North Carolina, 1896-1920